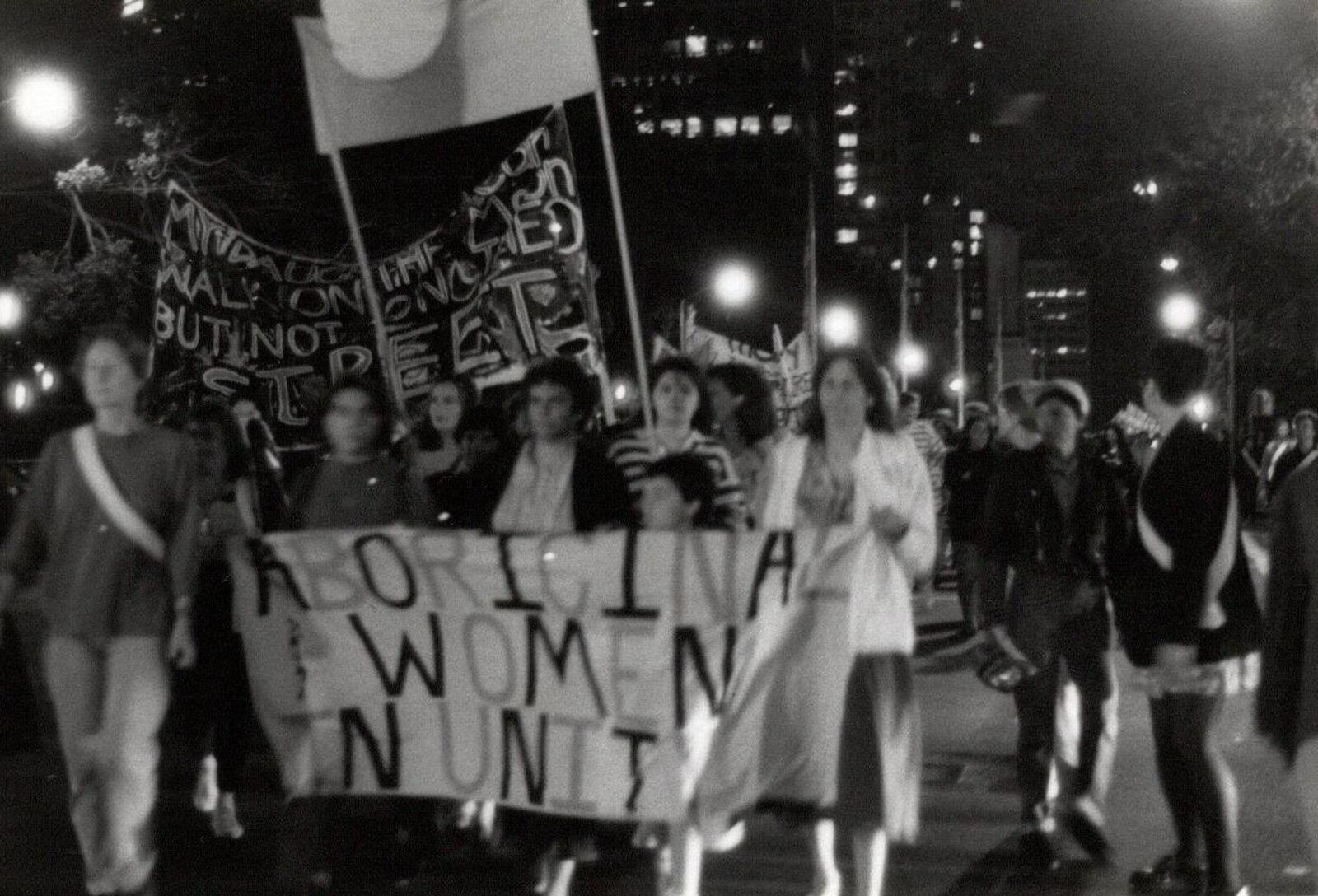 Key dates in our history

From our establishment at meeting of 500 women at Redfern Town Hall as the Sydney Rape Crisis Collective to today as Full Stop Australia.

1971 500 women met at Redfern Town Hall and established the Sydney Rape Crisis Collective. This was a group of unpaid workers who provided crucial community services to support women who had been raped.

1974 Funding received after an approach to the late then-Prime Minister Gough Whitlam, the collective became the first specialised service for women who had been raped. It was located at Women’s Liberation House.

1976 Introduction of self-defence classes for women.

1978 Phone-in topics: women’s experience of child sexual assault, and women who had been raped by professionals.

1983 ‘Girls in Schools’, a rape awareness program for schools commenced and led to many schools introducing self-defence classes and assertiveness training for their students.

1984 The first edition of ‘Surviving Rape’ was published. Second edition published in 1989, featuring a chapter written especially for Aboriginal women.

1985 The collective struggled to validate its existence in the face of opposition from local community and government agencies. Outcome was recognition as an essential service and increased funding.

1986 Workers provided: 24/7 Telephone counselling for sexual assault survivors in NSW. On-call support delivered to accompany women to medical appointments and other needs such as Police and Court appointments. Outreach provided through visits to survivors in their own homes or at refuges.

A Youth Worker was employed to offer a specialist service to young women.

A Referrals Database was established, as well as an Administrator role.

Survey on Sexual Abuse of Developmentally Disabled Women was run with the aim of working with other services to establish special rehabilitation and housing for these women.

The service was promoted via Val Morgan cinema advertising.

Management of the Halfway House was handed over to Maori Women’s Council.

No longer able to support the Women’s School of Self-Defence financially.

1991 – 1992 Telephone and face to face counselling continued to be provided, two support groups delivered, however outreach and on call support work was severely limited.

Introduced a ‘008’ free-call number on an additional telephone line to improve accessibility to women in rural areas; proportion of clients in rural NSW increased.

1993 The service extended its hours of operation to include overnights.

Rape Crisis Centre was the first sexual assault counselling service in NSW to make its services accessible to deaf and hearing impaired women.

1994 Manifesto Project to raise community awareness about sexual violence propaganda was established with the Coalition Against Sexual Violence Propaganda.

1995 Bosnian Women’s Project established to raise awareness and increase support for women in the Bosnian community who have been sexually assaulted.

Delivered a petition demanding rape to be recognised as a war crime to the UN and the International Criminal Tribunal.

Sought to increase accessibility to women with disabilities, including:

Surviving Rape: A Handbook about Rape for Survivors, Family, Friends and Workers, narrated by Jenny Vuletic, was awarded Special Commendation for an outstanding non-winning entry in the National Library of Australia's TDK Australian Audio Book Awards.

1997 Significant increase in demand for and provision of telephone counselling services.

Delivered workshops for workers on sexual assault and disability, and ritual abuse.

Contributed to the Wood Royal Commission into Child Protection in NSW.

An upgrade of Message Bank technology contributed to a 78% increase in telephone counselling calls to the Sydney line.

A 112% increase in calls from rural areas due to engagement with rural services.

Participated in consultation about the review of S409B of the Crimes Act, NSW.

Provided training to women working at the Indonesian Welfare Association in Sydney to improve their capacity to respond to Indonesian refugees arriving in Australia following the riots in Jakarta (May 1998).

Presented a number of significant conference papers, including:

- No More Falling Through the Net, Sydney

2000 The number of phone contacts increased by 27% over the previous three years.

The centre was awarded a Certificate of Quality following a review of performance against the Standards for Women’s Health Centres.

2001 The Centre joined the National Association of Services Against Sexual Violence.

The fourth edition of “Surviving Rape” was published.

Training programs were developed for workplaces in:

- Managing Sexual Assault in the Workplace.

2004 An Australian Council Research Grant enabled the centre, lead by Professor Moira Carmody, to participate in the research, development, implementation and evaluation of the ‘Sex and Ethics’ Sexual Assault Primary Prevention Program.

Training in crisis intervention was developed for counselling professionals.

2005 Rape Crisis Online launched – an online counselling service for those who had experienced sexual violence.

With Professor Catharine Lumby and the University of Sydney the organisation participated in the development of the ‘Playing by the Rules’ program;

2006 Client contact increased by 55% as a result of innovative promotional activities.

2007 The organisation was awarded the ‘Best Solution to an Identified OH&S Issue’ award by WorkCover NSW for its vicarious trauma management model.

2008 The organisation was funded to provide the ‘Van Against Violence’ program which offered training for workers on responding with compassion from 31 locations.

An online therapeutic support group was established for young women who had experienced sexual violence.

2009 The second edition of the Best Practice Manual for Specialised Sexual Assault Crisis Telephone and Online Counselling was published.

The Community Based Counselling Service commenced.

Participated in the development of Best Practice Standards for the Primary Prevention through Education of Sexual Assault.

Representation on the NSW Victims Advisory Board.

The organisation was accredited to the Quality Improvement Council Health and Community Services Standards.

2010 The organisation contributed to the development of ‘The National Plan to Reduce Violence Against Women and their Children’.

The organisation was funded to provide telephone and online counselling for ‘1800RESPECT’ the national sexual assault, domestic and family violence counselling service.

The organisation researched the needs of rural and remote practitioners.

2012 A national ‘Dunny Door Campaign’ for the 1800RESPECT service was delivered.

‘Hey Sis, we’ve got your back’ program established to support Aboriginal women who are working in their communities against sexual assault.

The organisation changed its name: Rape & Domestic Violence Services Australia to reflect its national focus and increased range of services.

The organisation established Sexual Assault Counselling Australia to provide telephone and face to face counselling services to people affected by the Royal Commission into Institutional Responses to Child Sexual Assault.

2014 A delegation from China with the Australian Human Rights Commission was hosted.

Secondary Prevention Counselling Program established for men at risk of using violence in their relationships.

Trauma specialist counselling provided to therapists supporting those impacted by the Royal Commission.

KPMG identified three options from that review: increased funding for the existing operating model; a triage function; and a trauma-specialist triage function.

Medibank Health Solutions was selected by the Department of Social Services to implement the triage function, which commenced in August 2016.

The findings of this project were shared at the International Mental Health Conference 2016 held in Queensland, where the work was well received.

2017 Since 2010, Rape & Domestic Violence Services Australia had been the clinical service provider of this national 24/7 telephone and online counselling service for anyone in Australia whose life has been impacted by sexual assault, family or domestic violence. The funding arrangement was via a sub-contract with Medibank Health Solutions. Due to ethical concerns about the service, Rape & Domestic Violence Services Australia withdrew from 1800RESPECT in October 2017.

2018 In May 2018 the Good Hope Foundation of Taiwan invited Rape & Domestic Violence Services Australia to present at their International Conference on Gendered Violence. Conference delegates from across Asia where interested in Australia’s legal response and how the service systems, including counselling, emergency accommodation and financial support, operated.

To support non-government organisations in their critical work the Australian Services Union launched the Civil Society Campaign, and the Australian Council of Trade Unions the Change the Rules Campaign. Both campaigns were fully supported by Rape & Domestic Violence Services Australia as they seek to ensure fair standards and wages in our sector, proper and transparent funding, and safe and respectful work environments.

2019 The organisation’s Best Practice manual for Specialist Trauma Counselling 4th edition was updated. The manual introduces evidence-based frameworks which closely align with the organisation’s values and further develops approaches to working with those who are experiencing complex trauma.

COVID-19 challenged the organisation to expand it's online training presence in a very short period of time.

2021 Rape and Domestic Violence Services Australia becomes Full Stop Australia. This name change ties together our services with our philanthropic efforts and highlights our dedication and commitment in putting a full stop to sexual, domestic and family violence.